Click on the link above to listen to the broadcast 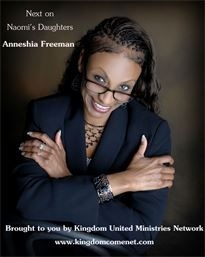 MBA, MSW, CADC- Executive Director of The Grand Master’s Keys, Inc. And CEO of Anneshia Freeman and Associates Consulting Services, LLC Creator of “The Lies That Bind – The Legacy of the Locks®”

Anneshia Freeman was born and raised in the church while emotionally, physically, sexually, and spiritually abused at home. She was taught about God but did not know Him personally and thus became a target for the lies and tricks of Satan. She spent 15 years residing in the drug and prostitution subcultures wrestling with strongholds implanted in her childhood. God came after His lost sheep and revealed Himself to her while she was in active addiction. She met God in that place. On the 7th day of the 8th month of the year 2000, God delivered Anneshia from a $300 to $400 a day crack cocaine habit and began restoring her to sanity. Since leaving the streets, Anneshia has graduated Summa Cum Laude four times with degrees in Computer Application Technology, Business Studies, Master’s of Business Administration, and a Master’s of Social Work which she completed on the King, Chavez, Park’s Future Faculty Fellowship. Ms. Freeman is also a Certified Alcohol and Drug Counselor (CADC-M). Under the guidance of the Holy Spirit, Anneshia wrote and developed a cognitive restructuring and resocialization program entitled “The Lies That Bind – The Legacy of the Locks®.” The program is based on the work of several experts in the fields of neuroscience and psychology. The program also utilizes concepts from computer programming as the mind operates like a computer. Anneshia brings the three disciplines together, under the guidance of the Holy Spirit, and introduces people to the lies that Satan planted in their unconscious minds as children. She is anointed to instruct people on how to reprogram their minds to think in accordance to God’s Word. Anneshia is a well-known secular lecturer as well as a prolific minister of the gospel. She is also a columnist for The Grand Rapids Times Newspaper.